He possesses traditional superpowers like flying and some non-traditional ones (e.g. super-flatulence, the ability to scrape toast shavings from his head). He can fly by launching himself from a toaster, or dispensing a healthy amount of flatulence. He can fly backwards, or at an angle. His catch phrase is "Leave everything to me!" Powdered Toast Man hides his true identity behind the guise of Pastor Toastman, a "cool" youth deacon. His call to action is the shouting of his name, with significant stress on the "man".

Powdered Toast Man's voice was provided by the late Gary Owens, a voice actor and disc jockey. The act of Powdered Toast Man shouting his name is a reference to how some of Gary Owens' superhero characters like Birdman and Space Ghost would often call out their names.

Although usually voiced by Owens, according to IMDb, Darrin J. Sargent (a regular cast-member in the first season) voiced Powdered Toast Man in the first commercial, at the beginning of Robin Höek/Nurse Stimpy.

Powdered Toast Man is endowed with various abilities and, like many superheroes, has a mysterious background and an alter ego.

Powdered Toast Man can fly, either by releasing flatulence, by inserting his head into a special toaster and launching from it, or merely by pushing off from the ground. Oddly enough, he faces backwards when flying. He can also hover in mid-air. His powers include some offensive weapons: high-velocity raisins shot from his mouth, hyper-corrosive croutons fired from his armpit, butter pats that are launched from the top of his head, and hyper-acidic marmalade from his navel. There are several signals that alert Powdered Toast Man to danger — his tongue phone, the inflation of his briefs, the dissipation of the toast particles in his head, or the reading of emergency messages encoded in slices of olive loaf.

By day, Powdered Toast Man is Pastor Toastman, a "cool youth deacon". His disguise is composed of a pair of thick black spectacles (the earpieces of which are physically embedded in his head due to his lack of ears) and a pastor's collar, a possible parody of Superman's thinly disguised alter ego, Clark Kent. Pastor Toastman's office also serves as his headquarters, and he is served by a lovely young female assistant named "Catholic High School Girl" and it is strongly suggested that the two have a romantic relationship.

Most of Powdered Toast Man's accomplishments are dubious and pyrrhic - if he ever succeeds it is usually accidentally, and at the cost of unintentionally inflicting havoc on someone else. Additionally, he fights for the sake of Ignorance and Prejudice.

The product named after Powdered Toast Man (or vice versa) is true to its name — toast in powder form. Why anyone would want to eat powdered toast is unknown — after eating some, one character notes how "it tastes just like sawdust." Further throwing doubt as to its appeal, toast is usually served warm, but powdered toast is room temperature. Powdered Toast comes in a can with an aerated top, allowing the toast to be "sprinkled" out in a manner similar to that of shredded Parmesan cheese. Amazingly, the powder somehow comes together, forming a piece of toast that can be consumed. Perhaps itself a commentary on the obsession of American culture with quickly prepared pre-made foods, it seems to take more time to "make" a piece of cold, sawdust-tasting Powdered Toast than it would to toast a piece of bread.

Powdered Toast is never seen being consumed with butter, jam, or cream cheese, possibly because the fragile nature of the toast could not support such spreads. Though it's "jam-packed with Vitamin F," Powdered Toast doesn't make children smarter.

In the first commercial, at the beginning of Robin Höek/Nurse Stimpy, Ren asks Stimpy, "Isn't he wonderful?" Stimpy then says, "Why, He's TOAST-A-RIFIC!"

While attending Ren's dinner party, he holds in a burp, believing it to be bad manners. The pressure of this pops off his head, which lands on the Baboon's plate. The Baboon devours his head. 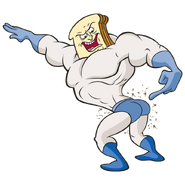 The title card of his first episode

Cling tenatiously to my buttocks! 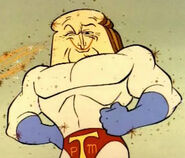 Leave everything to me!

Leave everything to me!
Community content is available under CC-BY-SA unless otherwise noted.
Advertisement