The Boy Who Cried Rat

Mrs. Alice Pipe is Mr. Pipe's wife, Eugene and Shawn's mother and a recurring character in The Ren & Stimpy Show.

Mrs. Pipe wears a pink shirt and an apron to cover her blue skirt. Like her husband, her face was never fully shown. In "The Boy Who Cried Rat" her outfit was the same, just red and orange. Though the side of her face is seen while she was sleeping in her trailer in "Road Apples" in which it is also revealed that she has blonde hair. She paints her nails with pink nail polish.

She seems very happy in her relationship and loves her husband, although she oftentimes scolds him. Like most mothers, she loves her two children. She is shown to be very kind, but stern and fair.

She makes her first appearance in "The Boy Who Cried Rat." Ren and Stimpy are hungry and tired of rooting out of trash cans, so they concoct a scheme in order to get free food, in which Ren disguises himself as a mouse and goes into her house one night. The next day, Stimpy comes by, which enthralls her, and she convinces her husband to allow Stimpy to work for them. While Stimpy tries to 'catch' the mouse (in reality, he and Ren are stealing their food) she becomes scared at the 'gruesome' scene. After Stimpy reveals that he and Ren's façade and that Stimpy, in hunger, ate the five dollars her husband gave them, Mrs. Pipe forces them to do chores.

In "Rubber Nipple Salesman" she tries to convince Mr. Pipe not to buy the rubber nipples Ren and Stimpy are trying to sell, since he never uses them, but after the pair show many of the uses, they decide to buy some.

In "Big Baby Scam" it is revealed that her and her husband have two sons. Hungry, Ren and Stimpy decide to bribe the babies with $50 to take a 'permanent vacation' so that they can take their place. Mrs. Pipe is shown to be naïve of this and scolds her husband after he tries to make them do tough tasks, such as learn to walk or walk on a bed of hot coals. Later, her, Mrs. Pipe, the 'children' and Old Man Hunger, who turns out to be Mr. Pipe's father, take a family bath together. 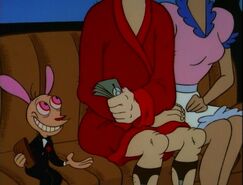 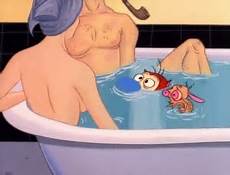 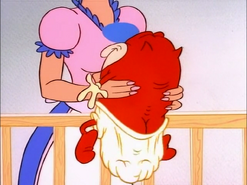 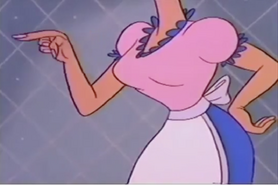 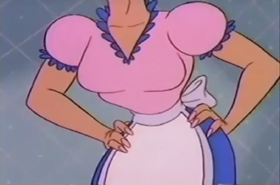 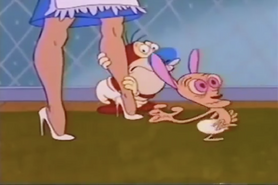 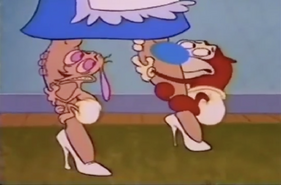 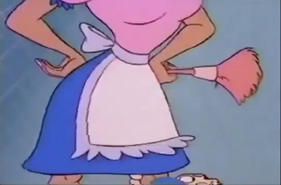 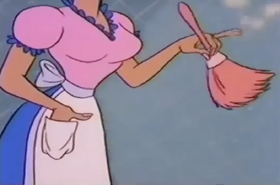 Add a photo to this gallery
Retrieved from "https://renandstimpy.fandom.com/wiki/Mrs._Pipe?oldid=18484"
Community content is available under CC-BY-SA unless otherwise noted.