Kowalski is a recurring character who appeared first in the episode "Fake Dad". His favorite food and drink is meat. He was 7 when Ren and Stimpy fostered him, despite having the resemblance of a full-grown adult. He also appeared in "Jimminy Lummox" as Tinker Galoot.

Kowalski is a seven year old Lummox who resembles a full grown, overweight man. He has a body covered in thick, coarse hair and is oftentimes unintelligent, speaking in short grunts and without pronouns. He usually wears a white prison cap on his head and appears in a variety of outfits, such as a blue prison uniform and a sailor suit.

Kowalski is a grumpy and short tempered Lummox. In the universe of Ren and Stimpy, Lummoxes are a humanoid race of highly unintelligent, overweight beings, who typically enjoy eating junk food and oftentimes speak in simple phrases or grunts while being covered in massive amounts of body hair. Kowalski is shown to take after this, as he is shown to only eat meat. He is also shown to have a violent temper when provoked, as after Ren hit him on the head, he threw a tantrum and turned many of his possessions into powder, including his couch and television, and even Stimpy. He also is shown to be rude, as he would constantly yell at Ren and Stimpy both and didn't respect Ren's belongings.

He was shown in his first appearance to take an instant liking to Ren, who was to function as his temporary father, embracing him when they first met and affectionately calling him Daddy. After he was sent back to jail, Kowalski tearfully said goodbye, crying all the way.

After this, Kowalski was shown to be someone of few words, usually not talking unless spoken to. However, Ren's care seems to have changed him as he was shown to follow orders and requests given to him and appears to be good, as he hit Jimminy on the head for hitting Ren, and even acted as the former's conscience.

Kowalski did make his first spoken appearance in "Fake Dad." He is mentioned as being part of a Big Brother-type program, in which he spends the weekend with a family who act as a surrogate family to him and give him 'the love he never had'. He i

s also mentioned as serving a 30 year sentence for 'crimes against humanity' although due to his young age, he is allowed out on weekend furloughs. Ren and Stimpy take him in during one such weekend, with Stimpy happy to take care of him and Ren afraid of him. During his visit, he creates a lot of ruckus in the house, destroying many of Ren's possessions, including his couch and books, with Ren deciding to spank him with a wooden spoon, only to be stopped by Stimpy, who believes that Ren hitting him wouldn't show him love. After Ren catches him smoking a pack of cigarettes, Ren hits him on the head as punishment, which leads Kowalski to destroy many of Ren's possessions (and Stimpy) in a tantrum. Later, the trio go to a park where Ren begins to lose his patience with Kowalski, as he wants only meat to eat and drink and wants toasted meat. After Kowalski begins to spit up, Ren tries to burp him, spending 36 weeks (or nine months) doing so, until Kowalski belches so loud that he destroys Ren's fur. Ren decides to spank Kowalski for this, telling him to take his pants off, but stops after realizing his mistake. After this, Kowalski is taken back to prison and shares a tearful farewell with Ren.

He would make several cameos after this.

He appears at Ren's party in Jerry the Bellybutton, which included other secondary characters from previous seasons, listening to Stimpy in his bellybutton.

He appears as a Lummox head, mounted over the duo's wall in "My Shiny Friend."

In "Ren's Retirement", he appears as a sales assistant at the funeral home, when Ren and Stimpy attempt to buy a coffin when Ren believes he is getting old. After Ren and Stimpy bury themselves alive, he begins to scoot on the grave, as per Ren's instruction. In this episode, Kowalski is shown no longer serving his prison sentence, suggesting that perhaps this either took place on a weekend or he was out on parole. 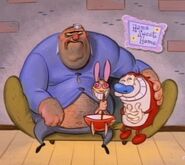 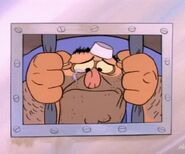 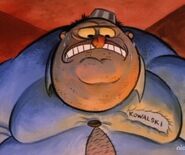 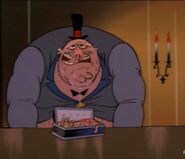 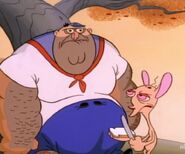 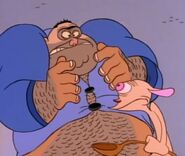 Add a photo to this gallery
Retrieved from "https://renandstimpy.fandom.com/wiki/Kowalski?oldid=30073"
Community content is available under CC-BY-SA unless otherwise noted.