6b
"Haunted House" is the fourth episode of the second season.

Ren and Stimpy arrive at a mansion not knowing it is haunted and decide it is the perfect place to "kill twelve minutes". While they are outside, a Droopy-like ghost plans to scare them. First, he tried to scare them with his most hideous grimace, but got knocked down by the door. In his second attempt, Stimpy went to standing up knight armor, thinking it is a wood burning stove. The ghost tries to slice him in half, but the ghost goes to the bottom, Stimpy puts the wood in his mouth, and burns the ghost to a crisp. Later the ghost hides in a stack of bread attracting the duo by yelling, "I'll hide in this...BREAD!!" But he gets covered in peanut butter, marmalade, fish eggs, and a fish. And then gets beaten by Shaven Yak. Later on the ghost tries to attack Stimpy while he is showering, (Psycho shower scene reference) but instead he gets used like a rag. (deleted scene) Later the ghost tries to scare Ren by placing a bloody, disembodied head on his head while he is fast asleep. Fortunately, a fairy comes and removes the head, replacing it with a couple of dimes, before leaving again. Ren wakes up feeling something strange. "Quick, Stimpy!" he exclaims, "There's something in my ear!" Stimpy inspects poor, scared Ren's ear and realizes the situation; after calming Ren down he explains that he has just been visited "by the Bloody Head Fairy!" Oddly, this cheers Ren up. When the ghost sees this, he punches himself in the face repeatedly. (end of deleted scene). Later on the ghost tries one last thing. Inside a treasure chest, he hops out wearing a witch doctor mask, and wielding a chainsaw. He later approaches the bed waking up the two by screaming, "Wake up you...PIGS!!!" Ren and Stimpy then mistake him for a trick-or-treater and give him candy. Exasperated, he yells, "That's it! I quiiit!" He takes off the mask and admits to them that he has been trying to scare them all night, to little avail, and calls himself a failure. Later Stimpy tries to cheer him up, but the ghost tries to hammer a nail in his head. Stimpy gives him a bottle of poison to use instead. The ghost drinks it then dies then comes back to life as a naked African-American man named "Rudolph the Jazzman." He then leaves in a big red car, with the episode ending with Ren & Stimpy waving goodbye to him in the end. 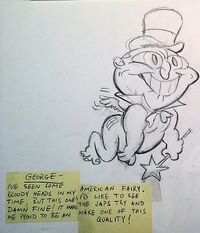