One of Ren & Stimpy's most notable visual trademarks is the detailed paintings of gruesome close-ups. Many other cartoons such as SpongeBob SquarePants (another Nickelodeon cartoon) also have closeups like this. They are painted by the storyboard artists, most notably Bob Camp. They usually occur in moments such as: Ren stepping in Stimpy's hairballs, Ren's rotten unbrushed teeth, Stimpy's sleep-encrusted eyes, infected toes, etc. The paintings are used to show the disgusting humor of Ren & Stimpy as a way to add up the suspense or punchline. 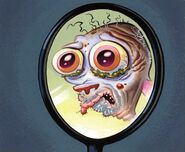